No longer available for pre-ordering

Accessorise your track layout with this classic style Dunlop Footbridge, highly recognisable as being one of the most iconic bridges in motorsport, it was at one point one of the most famous landmarks of the Donington Park race track in the United Kingdom.

The bridge was eventually removed from the race track in 2009 during the period of time when Donington Park were bidding to host the British Formula One Grand Prix. The 30-year-old bridge was eventually, famously bought by Radio DJ and car enthusiast Chris Evans during a racing memorabilia auction for about £300, in aid of a local Leicestershire charity. 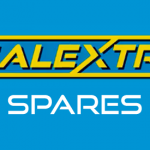