The Ferrari 512S had failed to beat the Porsche 917s in the 1970 World Sportscar Championship. Despite their higher weight and greater consumption, the car had shown winning potential, but the rushed-in construction had left reliability issues unresolved. An unusual bad luck struck at Le Mans, where an accident eliminated four of the five 512S in one stroke. For the ending part of the season Ferrari decided to create a lighter and aerodynamically advanced version: thus the 512M (Modified). The new ‘M’ model proved immediately faster than the ‘S’ version, but took its first steps only three weeks before the last Championship race at Österreichring (now Red Bull Ring), where Jacky Ickx led the race until he had to retire due to an alternator failure.
The first victory of the new Ferrari took place in South Africa on 7 November 1970, in a race outside the World Championship, in the hands of Ickx / Giunti who reached the finish line three laps ahead in the Porsche 917K driven by Siffert / Ahrens.
In 1971, however, despite the excellent end of the 1970 season for the 512M, Ferrari decided to concentrate the company’s efforts on a car in line with the 1972 regulations, leaving the 512M to private teams: the 512M, therefore, despite its outstanding performance, could never prove its true value. It remains, however, one of the most beautiful and iconic Sports Prototypes in the history of motorsport.
The CA51a model represents the car of Team David Piper which, driven by Chris Craft and David Weir at the Le Mans 24 Hours in 1971. Starting 13th from the grid, the car dropped to 44th place in the 2nd hour of the race but climbed back to an excellent 4th place overall. 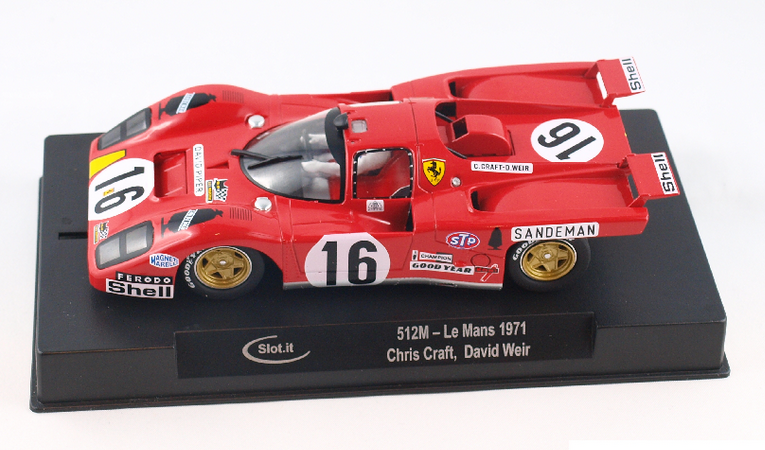