In business for over 40 years, Mini Grid enjoys an international reputation with its wide selection and beautiful presentation of quality products representing the motorsport, automotive and motorcycle industries.

In addition to model cars, motoring books, art and apparel; MiniGrid is Toronto, Ontario, Canada’s leading source of the best in Slot Cars, Slot Car Sets and Accessories. We carry brands including Carrera and Scalextric. Whether it’s for a home track set up, or competitive club racing or just to look cool on your shelf, MiniGrid’s staff will help you out – in the store or shopping on-line.

Started in 1978 by George Maxwell, along with his wife Julia and son Scott, it truly was a family business which operated out of their house as a mail-order operation. Known as the source for model kits and die-cast, the business continued to grow, and in 1986 they opened their first retail store Unionville, a Toronto suburb, where the business expanded until moving in 2003 to its current location in downtown Toronto in the Mount Pleasant Village. George retired in the early 2000’s, mostly so he could hang out at racing tracks around the world; while Julia continued to be a regular in the store for many years to follow.

Over the years the business has changed dramatically. From the origins of 1/43rd scale model kits imported from around the world; expanding into die-cast in the 1980s. As the kit industry began to shrink Mini Grid expanded its range over the years, with an extensive library of books and DVD’s and exclusive and rare automotive art and themed clothing. More recently over the past 10+ years, the welcome resurgence of the slot car industry has created an energetic and vibrant new customer base of all ages and has pushed Mini Grid to offer the largest selection of slot cars in Canada!

Scott Maxwell now operates the business when not on the road for his ‘day job’: a professional racing driver, driving for Multimatic Motorsports for nearly 30 years now; along with managing the latest Maxwell to keep the family tradition going, his 12 year old son Ryan, a rising star in the Canadian karting scene. 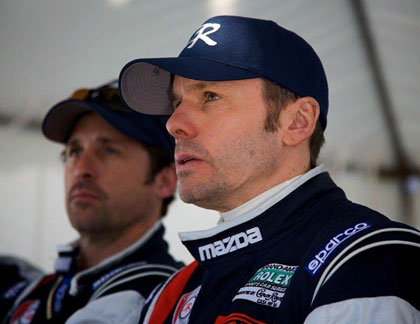 Scott currently competes in the IMSA Championship alongside his involvement in the Ford GT street and race car program with Multimatic Motorsports and Ford Performance.